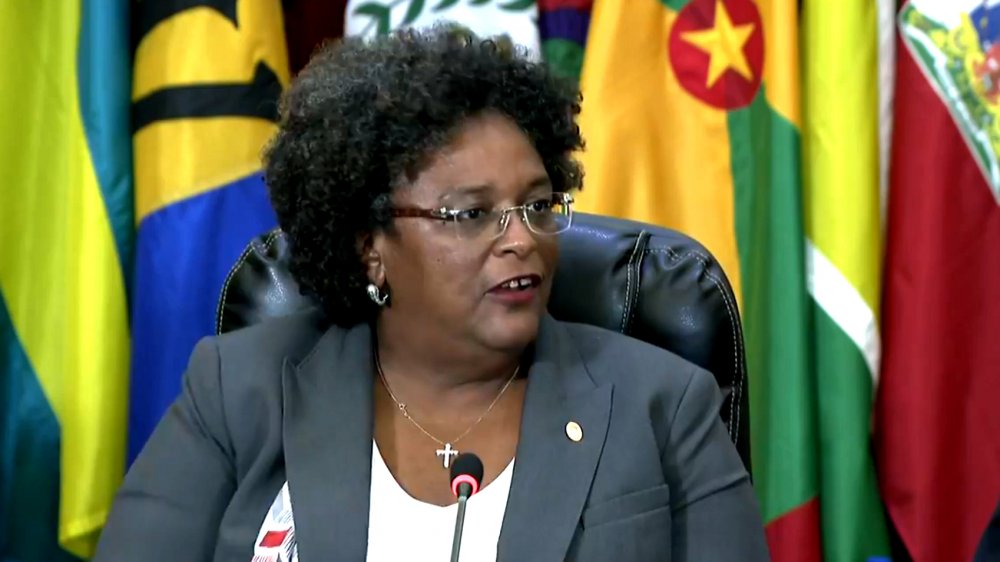 BARBADOS has joined six other members of CARICOM in the signing of the Protocol of Contingency Rights.

Prime Minister of Barbados, the Hon. Mia Amor Mottley signed on behalf of Barbados during the final day of the 39th Regular Meeting of the Conference of the Heads of Government of the Caribbean Community (CARICOM) in Montego Bay Jamaica on Friday evening.

The Protocol, which has been in the works for over a decade, paves the way for dependents of persons with approved Skilled Certificates to not only move freely with their loved-ones, but access basic social services. Other signatories included Grenada, Haiti, Jamaica, St. Lucia, St. Vincent and the Grenadines and Suriname.

It is just one of the many initiatives co-signed by the Heads of Government. Chairman of the conference and Prime Minister of Jamaica, Andrew Holness, acknowledged that there is a sense that CARICOM is “all about talk”, and the view that representatives are just “kicking the can” down the road during Heads of Government meetings, with little to show for it as it relates to the CSME. However, he assured that this is far from the truth.

Prime Minister Mottley agreed with her Jamaican counterpart and defended the positions taken over the two-and-a-half day conference saying: “For this protocol to have been signed today is the most significant event in the history of Caribbean affairs since the Single Market was signed here in Jamaica and came into effect here in Jamaica in 2006.”

“This is where it matters. This is where it makes a difference to the lives and decision of people and I think that the media can work with us to communicate in a tangible way what this means for every Caribbean citizen who belongs to a country that is signatory to the Single Market.

“The integration of capital markets, the financial services architecture, the common policy for investment and the code for investment, such that we are not competing against each other in a mad race to the bottom.”

She stressed that these areas are critical towards being able to make the market work more effectively for those who want to invest across the region. She used Barbados as an example.

“In Barbados we have collective savings of just under BDS$9 billion. I would like to believe that our citizens will have an opportunity to have a larger return of what they get now if they put their money in a bank account. A bank account they are getting for savings 0.01 per cent. They are effectively paying the banks to keep their money. If there are opportunities in Jamaica, St. Lucia, Suriname or Guyana, then our citizens should be able to mobilise their savings to make that investment and vice versa,” she said.

Additionally she noted that the conference mandated that those agreements must be in place for signature before next July.

She also made the point that a number of timelines, dates and meetings have been set to address other matters of regional importance, including a Council for Finance and Planning committee meeting in September.

Mottley also commended the recommendation from the Golding Commission with respect to dispute resolution. “Whether persons should have to go to the Caribbean Court of Justice, which is a heavy cost or where they ought to have some intermediate dispute resolution body that is more effective or more efficiency, whether there are other aspects of how we change how we do business.”

“We can’t do this while doing ten other agenda items at a heads meeting. So far from kicking the can down the road we have created a special place and special space in November to deal with some of the larger issues that will hopefully inform our work over the next decade,” Prime Minister Mottley assured. (JH)