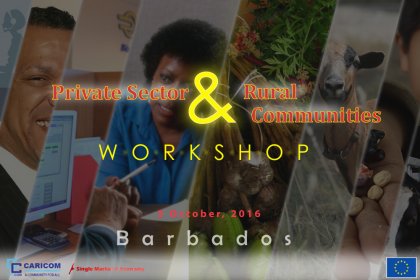 The Caribbean Community (CARICOM) Secretariat is ensuring that vital stakeholders continue to be well informed about the CARICOM Single Market and Economy (CSME) and its significant benefits. On Wednesday, October 5, a one-day CSME sensitization workshop is being hosted in Barbados. Approximately 30 participants from private sector bodies and rural communities  will convene at the Lloyd Erskine Sandiford Centre for information sharing and dialogue regarding the CSME. The activity is facilitated under the 10th European Development Fund (EDF) CARICOM Single Market and Economy (CSME) and Economic Integration Programme (EIP).

Presentations will be made by resource persons from the CARICOM Secretariat and will include topics such as the current status of the CSME; the CSME as a platform for private sector growth and development; and facilitating agricultural trade and investment in the CSME. The presentations will be followed by dialogue sessions in which participants can share their experiences and clarify issues surrounding the CSME. At the end of the workshop, participants should have a better appreciation of the benefits of the CSME for their respective sectors and how to take full advantage of them. The workshop will also be attended by representatives of the Ministry of Agriculture, Tourism and the Office of the Prime Minister.

Similar workshops have already been held in Jamaica and St. Vincent and the Grenadines with others scheduled for Belize, Guyana and Suriname. This initiative forms part of a larger public education and awareness programme on the CSME in which certain target groups such as tertiary students, youth, teachers and the wider public are sensitised.