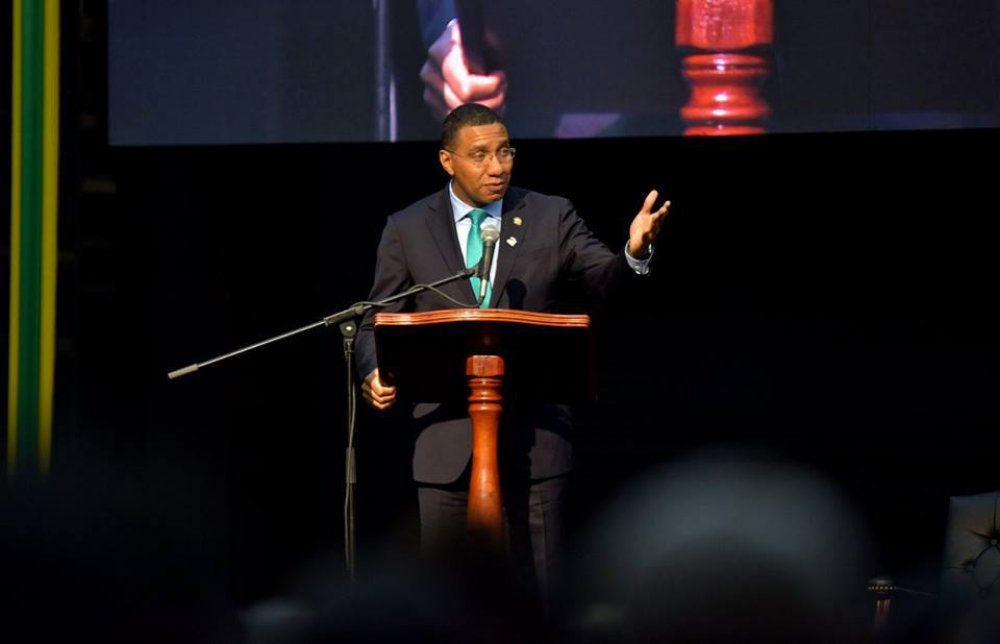 Chairman of the CARICOM and Prime Minister of Jamaica, the Most Hon. Andrew Holness, addressing the 39th Regular Meeting of CARICOM Heads of Government (Photo via JIS
Read 500 times
Rate this item
(0 votes)
Tagged under
Share this

The CARICOM Single Market (CSM) is the ultimate manifestation of Regional Integration. This is according to Chairman of the CARICOM Conference of Heads of Government and Prime Minister of Jamaica, the Most Hon. Andrew Holness. He was speaking at the opening of the Thirty-Ninth Meeting of the Conference of Heads of Government of CARICOM on Wednesday evening in Montego Bay, Jamaica.

According to Prime Minister Holness, some of CSM’s pillars represent the only means by which the Region’s citizens will experience the process of integration. He said the leaders of the community should therefore relentlessly pursue the goal of overcoming what he called their implementation debt.

We must address the critical role of the Single Market in supporting economic development, in further facilitating trade in goods and services, the expansion of investments and the free movement of people across our Region”, he said.

Prime Minister Holness also called on all Member States to summon the political will to ensure that all programmes and initiatives were strategically focused and geared towards meeting an ambitious process of reform. He said it was imperative to undertake an honest and thorough assessment of whether the Community was appropriately positioned to collectively advance economic cooperation for the mutual benefit of the Region’s countries and peoples.

Turning to the issue of crime and violence, the Chairman said it would be one of the priorities of Jamaica’s Chairmanship, which will last until the 31 December. He stated that while gun and gang violence had decreased in some Member States, it had escalated sharply in others. This he said has had significant effects on citizen security and economic development prospects.

He urged the Heads to ensure that everything possible was done to make sure the well being of the Region’s economies, infrastructure and territory were protected from threats related to criminal activity. He expressed the view that those challenges transcended borders and were difficult for any one country to solve alone. He posited a synergetic approach through increased vigilance information sharing and networking among Member States and International Development Partners as one solution.

Building resilience to climate change and natural disasters was another matter raised during the Chairman’s address. He said it was an absolute imperative for survival as the costs associated with the frequent reoccurrence of natural disasters were excessive. To highlight the gravity of the situation, Prime Minister Holness pointed to statistics from the World Bank which indicated that Hurricane Irma caused damages of 14% of GDP for Antigua and Barbuda and 26% of GDP for Dominica.

Our reality is one of deep vulnerability created by existential threats that far transcends our income status”, he stated.

On a more positive note, Prime Minister Holness said the Caribbean was taking responsibility for designing appropriate risk mitigation, risk transfer and risk financing tools. He said CARICOM was absolutely important from functional, economic and resilience perspectives and was the means by which the Region would be able to survive and recover from existential threats.

Mr. Holness also used the opportunity to reaffirm Jamaica’s commitment to the principal objectives of CARICOM, including the expansion of trade and investment opportunities for its members, the promotion of foreign policy coordination and structured functional cooperation. He outlined that Jamaica’s chairmanship would have specific focus and intention, mindful of the rapid dynamics of the global world and the need for effective response to the changing realities. He said the theme being followed for the Chairmanship was ‘Building stronger resilient and secure partnerships for prosperity’.

In concluding, Prime Minister Holness said that there was no doubt that CARICOM would have to contend with challenges, uncertainties and setbacks in pursuit of Community building efforts, but in order to keep progressing, the Region would have to keep evolving.

I unreservedly believe that it is worth recommitting to collectively harnessing the potential to drive development and prosperity in the Region. Indeed, we have a responsibility to our people to drive real and measureable progress. Let us not fail them. Our collective future depends on our commitment to building stronge,r resilient and secure partnerships for prosperity”, he concluded.