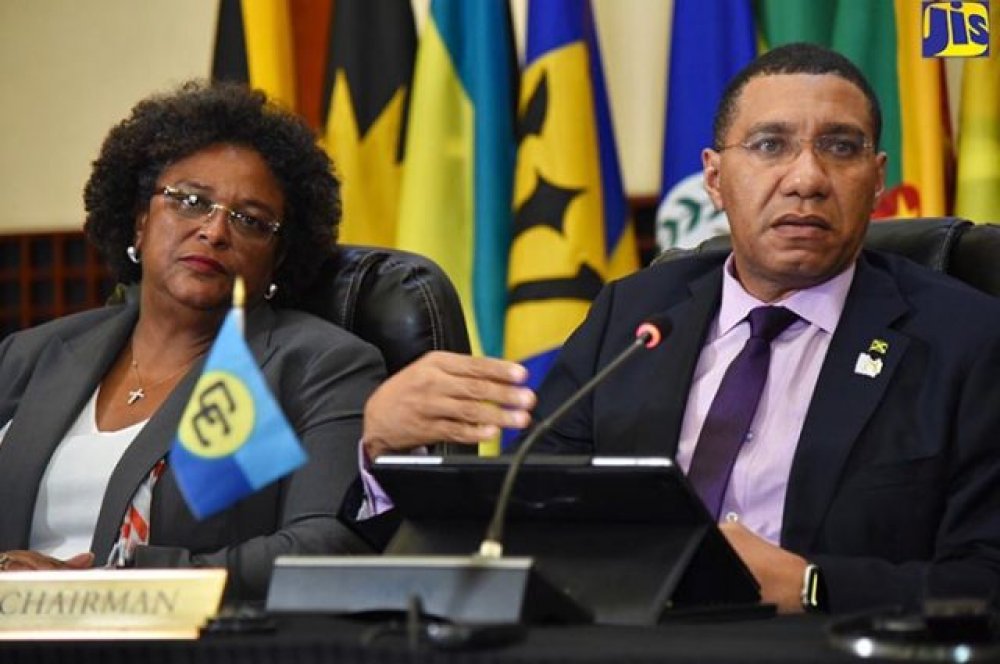 Barbados PM, the Hon. Mia Mottley, and Jamaica PM, the Most Hon. Andrew Holness, Community Chair, at the Press Conference at the end of the 39th Heads of Govt. Meeting (Photo via JIS)
Published in News
Read 312 times
Rate this item
(0 votes)
Share this

(Jamaica Information Service Pres Release) Heads of Government of the Caribbean Community (CARICOM) have put measures in place to fast-track the full implementation of the CARICOM Single Market and Economy (CSME).

Among the strategies is a special meeting of CARICOM Heads to focus solely on the CSME. It is to be held in Trinidad and Tobago in November this year.

This was disclosed by Prime Minister and CARICOM Chairman, the Most Hon. Andrew Holness, during a press conference on Friday (July 6).

The Prime Minister was providing details on decisions taken at the just-concluded 39th Regular Meeting of the Conference of Heads of Government of CARICOM, held at the Montego Bay Convention Centre in St. James from July 4 to 6.

“Furthermore, the Prime Ministerial Sub-Committee on the CSME will now have quarterly meetings beginning in September in Barbados, which will be hosted by Prime Minister Mia Mottley, to give urgency to the implementation process,” Mr. Holness informed.

He further noted that Government leaders also put greater focus on advancing those areas that would help to create enabling support measures for a competitive Single Market.

These include an investment policy and investment code, an incentive regime, an integrated capital market and securities legislation.

“As leaders, we expect that these matters will be ready for full adoption at the 40th meeting of Conference in July 2019.These mechanisms will enable strong support measures for a successful CSME,” the Prime Minister said.

In the meantime, Mr. Holness stressed the Heads’ recommitment to making the mechanisms within CARICOM work, by taking decisive action.

“I am resolved as the Chair to ensure that we take action. We must get things done to make a difference. We are resolved to now begin to implement the decisions we take to improve the perceptions, especially amongst our youth,” he said.

The CSME is an integrated development strategy that is intended to benefit the people of the region by providing more and better opportunities to produce and sell goods and services and to attract investments.

Please see below CSME excerpt from the Communique issued at the conclusion of the Meeting:

Heads of Government reviewed the operation of the CARICOM Single Market and Economy (CSME) and reiterated the need to accelerate its implementation. In that regard they adopted the Protocol on Contingent Rights which will cover the rights of persons moving to another country under the free movement of skills regime as well as their spouses and dependents of those who move to another country.

Heads of Government regarded this as a major historic step that would encourage greater use of the free movement of skills as it ensures levels of comfort for families.

Heads of Government also put greater focus on advancing those areas which would help to create enabling support measures for a competitive Single Market. These include an Investment Policy and Investment Code, an Incentives Regime, an Integrated Capital Market and beginning with model Securities Legislation. They mandated the Council for Finance and Planning (COFAP) to finalise these instruments over the course of the year and to be completed by July 2019.

In recognition of the need to keep focus on the CSME they agreed that a Special Meeting of the Conference on this matter would be held in November 2018 in Trinidad and Tobago.

They also agreed that the Prime Ministerial Sub-Committee on the CSME will meet quarterly to guide and invigorate the implementation process.  The first such Meeting would be in September 2018.  Emphasis at this time would be on what is practical and achievable over the next twelve (12) months.

Heads of Government welcomed the outcome of Consultations with Stakeholders including the private sector, labour, non-governmental organisations, youth and the media and agreed that a Stakeholder Consultation, led by the Lead Head of Government with responsibility for the CSME and/or the Secretary-General, be convened on at least an annual basis.  In that regard, they urged Member States to establish consultative mechanisms at the national level.

More in this category: Greater comfort for moving families as CARICOM Heads adopt Contingent Rights Protocol »
back to top